May 26, 2021 Arts & Music, Our Work, Our Work: Grants & Awards, Teacher Grants
I want to punctuate that without the Pasadena Educational Foundation, these kids’ dreams would not have come true and this musical would not have been possible.Dr. Benita Scheckel | Principal, Altadena Arts Magnet
PEF’s Teacher Grants help PUSD’s inspirational teachers take their creative projects from idea to reality by providing resources to enhance the classroom experience for their students. Every year, the grants benefit thousands of students in Altadena, Pasadena, and Sierra Madre. SUPPORT TEACHER GRANTS Donate Now
The students at Altadena Arts Magnet School had spent their 2019-2020 school year preparing and rehearsing for the much-anticipated musical, The Little Mermaid Jr., when the pandemic forced the world to shut down. The school had been given a grant by the Pasadena Educational Foundation to help bring the musical to life; and Dr. Benita Scheckel was determined to figure out a way to make it happen during the 2020-2021 school year.

After considering how to reinvent the musical in a safe yet creative way, Dr. Scheckel turned to green screen technology. With the help of a Disney green screen specialist, each student came to school one or two at a time to film their scenes in front of the green screen. Students recorded their vocals individually at a music studio set up in one of Altadena Arts’s classrooms and the recordings were professionally mixed. When filming scenes in which they sang, students then lip-synced to their own tracks. 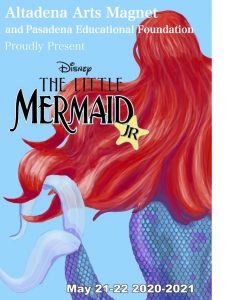 However, releasing the musical as a YouTube or Vimeo link wasn’t innovative enough. Dr. Scheckel contacted the Pasadena Public Health Department to get clearance to be able to turn the Altadena Arts playground into a drive-in movie venue. Once the green light was given, she rented a short throw projector and hired a professional to set up speakers for the best possible audiovisual quality for the film.

On May 21 and 22, Altadena Arts students and families drove in to watch The Little Mermaid Jr.’s premiere! The gates opened at 7:00 p.m., and the movie started at sundown, around 7:45 p.m. Moviegoers purchased pre-packaged concessions from the Dinglehopper Cafe, run by an Altadena Arts parent who is a chef.

Dr. Scheckel says, “The purpose of our all school musical theatre experience is to continue to build upon the culture of excellence that has become our standard at Altadena Arts Magnet;” and the investment into high-quality production at every stage of this movie-musical’s creation is a testament to that standard of excellence. Grants from both the Pasadena Educational Foundation and the Pasadena Showcase House for the Arts helped make this incredible production possible, providing the funds for professional special effects, sound, and setup. 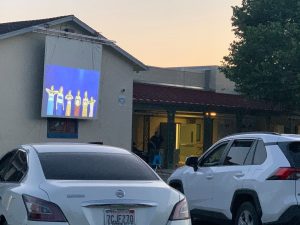 Your ticket for the: The Little Mermaid Jr. Premieres at Altadena Arts Magnet School