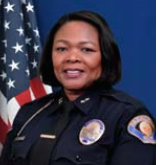 Cheryl Moody has been with the Pasadena Police Department for 27 years. Prior to joining the department, she served in the United States Air Force for 4 years. Cheryl began her law enforcement career as a Police Officer in 1992. After being with the department for three years, she was assigned to the Neighborhood Crime Task Force, working gang enforcement and street level narcotics. Three years later, Cheryl became a Community Services Liaison Officer, assigned to the Lincoln Triangle and Villa Parke area. This was a newly formed position and she assisted with establishing the roles and responsibilities assigned to that position. Cheryl then moved to the Field Training Program where she was a Field Training Officer. She takes pride in having had a hand in training several current and former employees.

In 2001, Cheryl was promoted to Police Corporal and worked with the area youth as the Police Activities League Coordinator. She was promoted to Police Sergeant in 2004 and supervised the Special Enforcement Section, where she managed the Gang Unit and SWAT Team. Cheryl is the first female sergeant to successfully complete a certified Special Weapons and Tactics Team Training (SWAT School).

In 2011, Cheryl was promoted to Police Lieutenant, where she again took command of the Special Enforcement Section. She also had the collateral duty of managing the department’s Hostage Negotiations Team. She was promoted in December 2014 to Police Commander and is responsible for overseeing the day-to-day operations of the Field Operations Division, which encompasses the Patrol Section and Community Services Section, and is the largest division in the department. On August 5th she will become the Acting Deputy Chief.

Cheryl graduated from California State University, Long Beach with a Bachelor’s Degree in Emergency Management and she obtained a Master’s Degree in Organizational Leadership from Woodbury University in Burbank. She is a founding member of the San Gabriel Valley Chapter of the National Organization of Black Law Enforcement Executives (NOBLE). In 2018, Cheryl was elected President of Women Leaders in Law Enforcement of Los Angeles County.

She lives in Pasadena, California and has two adult sons.

Your ticket for the: Wilson Middle : Cheryl Moody