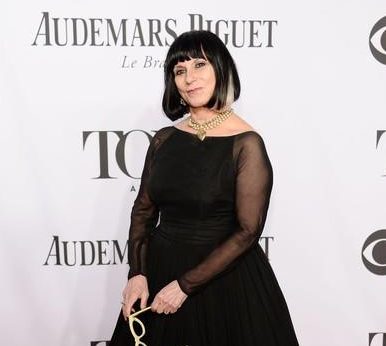 “HAUTE COUTURE MEETS LUNACY”
Rita Ryack was born in Boston, MA in the 20th century. She earned a BFA cum laude at Brandeis University, studied at the School of the Museum of Fine Arts in Boston, won a teaching fellowship in costume design at Bennington College , and received an MFA from the Yale School of Drama. She worked as a 2D cartoon animator at Lisberger Studios in Boston.
Her theatre career accelerated quickly. Her first Broadway musical, for which she received a Tony nomination, was the legendary MY ONE AND ONLY, directed by Tommy Tune, starring Tommy Tune and Twiggy. She was nominated for a second Tony for Harvey Fierstein’s CASA VALENTINA, directed by Joe Mantello. She has designed productions on and off-Broadway, working for such notable directors as Peter Sellars, Lee Breuer, Robert Brustein, Harry Kondoleon, Lynne Meadow, Jerry Zaks, Dan Sullivan, and Sam Shepard, and for distinguished playwrights Donald Margulies, Christopher Durang, Terence McNally, and Harry Kondoleon. ( see credits) She has been honored with the Obie Award for Sustained Excellence in Costume Design, where critic Michael Feingold described her design style as “haute couture meets lunacy.” She has worked extensively in regional theatre as well, and spent a season as principle costume designer at Robert Brustein’s ART.

She was introduced to Martin Scorsese, who hired her to design her first feature film AFTER HOURS, which led to collaborations on CAPE FEAR, BRINGING OUT THE DEAD, CASINO, and Michael Jackson’s rock video, BAD . Among other films with Robert DeNiro, she designed WAG THE DOG, also starring Dustin Hoffman, directed by Barry Levinson; THE FAN, directed by Tony Scott; MAD DOG AND GLORY, directed by John McNaughton ,and A BRONX TALE, Robert DeNiro’s directorial debut. Ryack has designed costumes for six of Ron Howard’s films, including APOLLO 13, RANSOM, A BEAUTIFUL MIND, and THE GRINCH WHO STOLE CHRISTMAS, for which she received an Academy Award
nomination. Among additional film credits are Brett Ratner’s RUSH HOUR 2; the musicals HAIRSPRAY with John Travolta and ROCK of AGES with Tom Cruise- both directed by Adam Shankman; and the cult classic TEETH, directed by Mitchell Lichtenstein, for whom she also designed the Victorian ghost story ANGELICA -which had its recent premiere at the Berlinale. She received an Emmy nomination for YOU DON’T KNOW JACK (HBO), directed by Barry Levinson and starring Al Pacino.

Ms. Ryack has most recently designed the world premiere of John Adams’ opera “Girls of the Golden West” for director Peter Sellars and the San Francisco Opera, and am currently designing the new opera “The Thirteenth Child,” based on a Grimm’s fairy tale, for Santa Fe Opera.

Her costumes have been reviewed often as “witty” “inventive,” and “startling.”
She has traveled to all the continents, including Antarctica. Ms. Ryack is also an award winning cartoon illustrator.