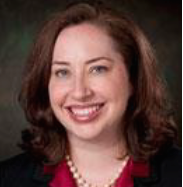 Monica Banken is the Children’s and Social Services Deputy for Los Angeles County Supervisor Kathryn Barger, advising on issues related to foster youth, education, social services, workforce development, community services, and aging. Prior to this position she worked as the communications and public affairs lead for the Center for Space Policy and Strategy at The Aerospace Corporation. At Aerospace, she worked for the Secretary of the Air Force on public presentations related to the Los Angeles Air Force Base on special assignment, and helped to create and coordinate the Center for Space Policy and Strategies’ programs for military, congressional, and administration audiences.

Monica Banken worked in state government affairs, business development, protocol, and event programming at the RAND Corporation, responsible for the coordination and promotion of public and donor programs at RAND’s Santa Monica office that highlight RAND researchers and findings. She promoted and disseminated RAND research to the California legislature, and served as liaison to state and local elected officials and to the consular corps in Los Angeles, while also working in business development for RAND Labor and Population. The RAND Corporation is a nonprofit institution that helps improve policy and decisionmaking through research and analysis.
Ms. Banken has served in state and local government throughout her career. She has most recently worked as the Deputy Chief of Staff to Orange County Supervisor Janet Nguyen, and began her career as a Jesse M. Unruh State Assembly Fellow in Sacramento, CA. While working in Califoria state government, Ms. Banken worked for Rep. Tom McClintock as an Assembly Fellow and legislative aide and served as the Legislative Director to State Senator Dennis Hollingsworth. She has also worked on a large number of federal, state, and local campaigns throughout the United States.

Ms. Banken worked for the U.S. Chamber of Commerce Western Regional Office from 2002 to 2006. In this position, she encouraged business and chamber grassroots involvement in federal legislative issues. She organized conferences, congressional roundtables, and served as a media lisaison. Ms. Banken helped to build business and chamber support in the western states for free trade agreements with Australia, Chile, Peru, and Central America (CAFTA-DR), as well as promoted fast track trade authority. She was instrumental in working to build grassroots support for CAFTA-DR in California and arranged a three city visit in California by El Salvadorean President Elías Antonio Saca.

Ms. Banken is the chair of the Legislative Outreach committee for the Los Angeles Area Chamber of Commerce World Trade Week Committee. She is also on the board for the South Bay Aerospace Alliance. Ms. Banken served as Chair of the Trade Commissioners Networking Group of the Los Angeles Area Chamber of Commerce. She has also served on the legislative affairs committees of the United Chambers of Commerce, the Hollywood Chamber of Commerce, and served as a publicly elected member of the 69th Assembly District Central Committee.
Ms. Banken holds a Masters in Public Policy and Administration from California Lutheran University and an A.B. from Occidental College. She is also a certified graduate of the Institute of Organizational Management (IOM) and the Southern California Leadership Network. She was a member of the Occidental College Board of Governors, and was honored as the 2015 Los Angeles Area Chamber Volunteer of the Year.

Your ticket for the: McKinley School: Monica Banken