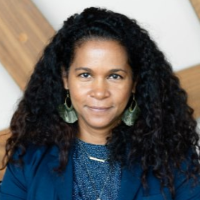 Karina Montilla Edmonds is a globally recognized visionary leader in the field of innovation, technology transfer, and commercialization. She currently serves as the Senior Vice President and Global Head of Academies and University Alliances at SAP, a multinational software corporation with offices worldwide.

Prior to joining SAP, Karina was the Global Lead for Cloud AI at Google where her primary role was to facilitate research collaborations in AI between Google Cloud and top academic researchers. Karina came to Google from California Institute of Technology where she served as executive director for corporate partnerships. She also worked in the Obama administration, where she was appointed the first technology transfer coordinator at the U.S. Department of Energy and served as a member of the White House Speaker Bureau to promote STEM careers to women and girls.

Karina earned her master’s degree and Ph.D. in Aeronautics from California Institute of Technology and her bachelor’s degree in Mechanical Engineering from University of Rhode Island.

She resides in Southern California with her three daughters, all of which, have a strong interest in STEM.

Your ticket for the: Blair IB Magnet: Karina Montilla Edmonds