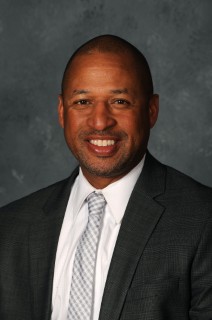 Erikk Aldridge is a Director in the AEG external affairs department and serves as the Director of STAPLES Center Foundation. AEG is one of the leading sports and entertainment presenters in the world. Prior to joining AEG, Erikk held executive level position with the Boys & Girls Clubs of Venice, the Walt Disney Company, the Los Angeles Dodgers, and the Los Angeles Lakers. In 2000, he was a member of the Lakers front office and received a championship ring. Erikk has written professionally with feature stories appearing in multiple sports related publications including SLAM Magazine. He also serves as a professor at USC in the Annenberg School of Communication. A graduate of the University of California, San Diego, Erikk earned a bachelor’s of science degree in Psychology. At UCSD, he was a three-year starter and team captain on the baseball team. A native of Inglewood, California, Erikk and his wife Tiffany live in Los Angeles, and have two teenage children.

Your ticket for the: William McKinley School : Erikk Aldridge