My Experience Riding on the Rose Parade: My Life in Full Bloom

The morning of the 133rd Tournament of Roses parade was a reflection of my life in full bloom.

On New Year’s Day morning I was a member of the Pasadena Unified School District (PUSD) Unit composed of the PUSD All-Star Band, Dancers, and Auxiliary, plus a Metropolitan Rapid Transit Company 1924 Model TT Jitney Bus. I was a PUSD Honoree and passenger on the bus representing the Pasadena Educational Foundation (PEF) as the Board of Directors President.
From Brookside Park to the Parade 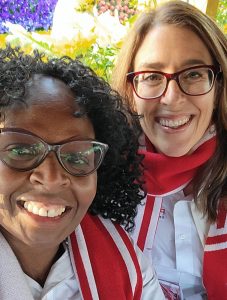 I have been a resident of the Pasadena Community for 58 years, beginning in 1963 when my parents moved to beautiful sunny California from the Midwest. Some of the earliest images of me as a toddler were taken at Brookside Park with me steadied on top of my father’s car with the Rose Bowl insignia in the background. Then as a young child, we attended many Rose Parades. Some of my first memories include viewing the parade from the Star-News building, where my father worked as a custodian. We watched from the picture glass window on the second floor, snacking on donuts and drinking hot chocolate. In high school, I was a float decorating volunteer and spent several days working in different capacities. One day I spent hours dipping tiny vases in icy cold water to preserve the flowers that they would soon hold. Another day it was taking handfuls of seeds to append to the side of the float, after what seemed like hours of laborious labor, I had only completed a small patch as my contribution to what would be a phenomenal site on New Year’s morning. This volunteer work experience extended my love and appreciation for the floats, their design, their mechanics, and their presentation each New Year’s Day. I had two New Year’s Eve overnight camping experiences one included my senior year of high school, and the second a few years later with friends from church. I have watched the Rose Parade curbside alone, with groups of small kids, on ladders, on blankets, with lots of snacks, and from the grandstands with my family. No matter how or where, it has always been new, refreshing, colorful, and beautiful. For me it never gets old.

My experience in the 133rd Rose Parade was amazing. I was able to survey my life budding and flowering. My meeting location started at my Alma Mater, Blair High School. Returning to that campus and looking at the band members I was able to reflect on my time as a musician during high school. Entering the Tournament House, I remember countless times driving by the “Wrigley Mansion” appreciating its charm. Then actually being on the Jitney bus and starting the parade I thought about the countless times I had been in those very places I was now passing as we cheered, waved, and wished the parade attendees a “Happy New Year!” As we traveled North on Orange Grove and then East on Colorado Boulevard, I was able to see my life in this community in full bloom. 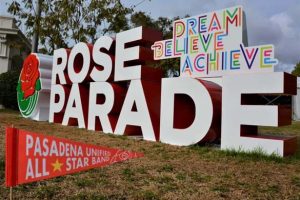 Over the years, many people and institutions have contributed to my development, growth, fortune, and enrichment. They include the Pasadena Unified School District; its teachers, administrators, its programs, my peers, and the many volunteers that supported the programs I participated in as a student including band, choir, yearbook, journalism, Blue Birds, Girls Scouts, and more. Pasadena City College where I received my Associate’s Degree and the momentum to matriculate to higher learning. My family, friends, and the faith-based community.
Special recognition

Within this message, I want to give special recognition to Dr. Bob Miller, 2022 Tournament of Roses President for his leadership and compassion for this community. Dr. Miller’s vision in introducing the theme “Dream, Believe, Achieve” with a focus on education for this year’s Rose Parade demonstrates his commitment to serving students. As one of my personal advocacy focal points is education, I concur it is this type of celebration and investment that enhances people and communities. It improves livelihoods, builds knowledge, and shapes futures. I am happy to be a part of this “building” and there are many others that agree. Along the parade route, there was a buzz within the Pasadena public school community and it was positive and infectious.
A woman holding photos of other poeple

On January 1, 2022, I represented the Pasadena Educational Foundation. As PEF celebrates 50 years of service to the PUSD and its students in Pasadena, Altadena, and Sierra Madre communities I know we have made and are making a difference in their lives through our support, programs, and resources as PEF is working to achieve excellence and equity in all PUSD schools. Similar to the volunteers in 1970 who were compelled to support PUSD and positively influence the lives of others including seven-year-old Felita, a PUSD student, I am hopeful that my efforts are growing and nurturing future community leaders. The excitement of the PUSD Unit being in the Rose Parade was evident from the buzz we felt along the parade route. PUSD proud supporters cheered as we passed, held up signs supporting their schools, wore their school’s apparel, and held photos of some of their favorite PUSD people (including me).
A gift wrapped in my memory

Saturday, January 1st, the early morning hours are now gift wrapped in my memory. It was packaged with a crimson, orange sunrise, a cool breeze, brilliant fluorescent flowers, and an array of fragrances. There was excitement and anticipation, it was a series of emotional images showing me, my life in full bloom.

Your ticket for the: My Experience Riding on the Rose Parade: My Life in Full Bloom

My Experience Riding on the Rose Parade: My Life in Full Bloom