“[Willard’s garden] has become a gathering place where learning opportunities are springing up. I think the teachers are able to use the space and take the kids’ lead, doing more investigating together or turning focus towards things the kids are more interested in.” Stacey Torres, second grade Willard Elementary School teacher

PUSD Master Gardener Jill McArthur had harvested about 70 loofahs from a vine at Pasadena High School and was trying to figure out what to do with them. She was in luck when she asked second grade Willard teacher Stacey Torres and her second grade co-teacher, as Ms. Torres’ second graders were in the middle of their producer-consumer unit. They cheerfully agreed to help Ms. McArthur turn all the loofahs into usable sponges.

First, all the ends of the gourds needed to be opened to remove the hundreds of seeds within. Students incorporated fractions into their seed removal by putting 25 seeds onto a sheet of paper each, counting up until they had 100 before finally depositing their seeds into the shared bag. They removed around 7,000 seeds in total. Then, they cleaned and dried out the loofahs, learning more about plant biology in the process. As a class, they discussed what loofahs are used for, and decided to make them into sponges to sell in a fundraiser. This project perfectly complemented their producer-consumer unit, prompting students to consider how much would people be willing to pay for their product. They even etched their own labels using styrofoam plates. The loofah processing incorporated art, money, supply and demand, plant biology, and math all in one project. 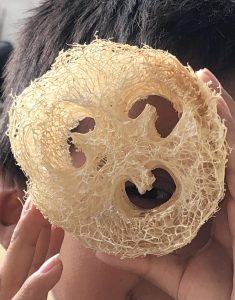 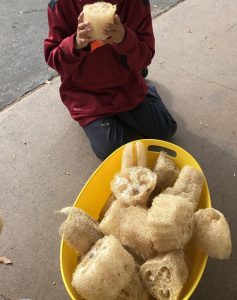 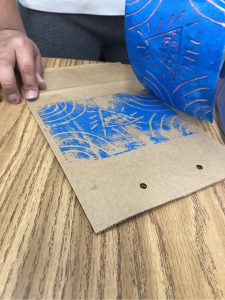 After all that hard work, each second grader was able to sell two bags of loofah sponges, in their personally created packaging, during the Open House. Students delivered a sales pitch to each person they sold to; and delighted parents were happy to buy loofahs from their charming students.

At the time, Willard’s garden didn’t include an orchard yet, and was in need of some fruit trees. The second graders were excited to help grow plants in the garden, and donated their loofah profits to the Willard orchard, purchasing a mixture of ten peach and nectarine trees. Volunteers from La Salle dug trenches and planted the trees; and when students returned, there was a huge pile of mulch on the playground that needed to be transferred to the trees to help them grow. In a wonderfully spontaneous show of community building that surprised and delighted both Ms. McArthur and Ms. Torres, students of every grade—even those not responsible for the trees’ purchase—pitched in to help mulch the trees. Older students taught younger students how to use the wheelbarrow, and all the students worked together to mulch the trees during recess. Within just two days, the mulch pile had dwindled down to nothing! 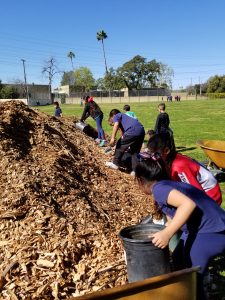 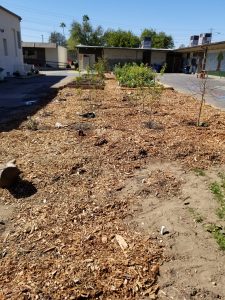 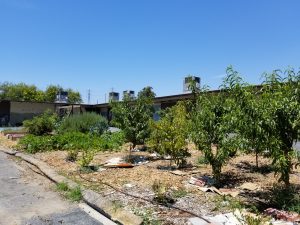 “I’m a parent too, so I get the hesitation of having [the kids] touch stuff. But having them be able to be in nature and be around dirt, doing things they would do naturally if there hadn’t been the pandemic, makes a difference for them. They get to see bugs and lizards—a small microcosm, but there is still a little bit of wildlife in the garden they can be exposed to.” —Stacey Torres, second grade Willard Elementary School teacher

And then…the pandemic hit. Students left campus, and unbeknownst to them, their trees rapidly grew from little sticks into full trees, with branches weighed down so heavily with fruit that everyone worried they’d break. In fact, right after Memorial Day Weekend 2021, Ms. McArthur sent emails to Willard teachers, encouraging them to pick the fruit right away, and every student received a brown lunch bag full of peaches. Ms. Torres noted that the trees provided students the exposure to healthy new fruits they may not have tried before, especially the white nectarines. Understanding where their food comes from was one of the goals they had for the kids, too, as teachers hoped it would encourage them to try new fresh foods.

That large batch of loofahs that Ms. McArthur was looking to get rid of became a fantastic learning opportunity for Ms. Torres’ second grade class, which they then turned—quite literally—into delicious fruits of their labor: lovely peach and nectarine trees right in their own garden. The garden and new orchard is a lovely place for the kids to socialize with students outside their class, joining in on activities like picking fruit together. It’s also an outdoor learning space, too: Willard’s science teacher regularly takes students outside to witness bees pollinating firsthand. Ms. Torres and other teachers bring students out to enjoy the fresh air and take brain breaks. The garden brings so many benefits, which will only continue to multiply as it expands and provides new learning and exploration opportunities.

Your ticket for the: From Loofahs to Prolific Fruit Trees: Growing Willard’s Orchard